One of the most difficult tasks in teaching karate is to teach and instill belief in the moral aspects of the martial arts. Most students are interested in the immediate results of fighting techniques and care little or nothing about the morality, which is the foundation, the martial arts are built on.

One of the most common questions asked of a sensei is; “if you are fully aware of the violence inherent in man’s nature, are you not turning out killers? Are you not teaching an art that enables man to destroy man?”

The answer of great Okinawan masters has always been, “yes, we are fully aware of the violence inherent in man’s nature and within karate lie techniques to kill with the open hand. But there is also morality inherent in karate, that controls the violence and the use of the art except under one condition; absolute necessity.” As one karate master stated, “karate is not a way to violence, but a way to gentleness.”

Now the question arises. How does one go about teaching fighting techniques and instilling morality at the same time?

It begins with the karate sensei. As a teacher, it is his responsibility to do his best to make sure each student is taught the morality, the ethics, and the values that lie within the martial
arts. The Code of Bushido, often referred to as the Code of the Samurai, expresses clearly within it’s seven precepts a strong moral code.

One of the most important lessons a karateka is taught is about self-control. It should be taught and understood, by the karateka, that anger is his worst enemy.

Another answer is found in Kata, THE HEART OF KARATE. Kata is meant to train the mind, and is not intended solely for self-defense or tournament competition. We should strive to bring it in contact with the real self and its true purpose.

Kata in the traditional way, is a spiritual ritual. The art of karate does not mean only the growth of technical excellence, but an ability to attain a spiritual goal though the practice of Kata, so that the karateka works against himself and succeeds in conquering himself.

In the martial arts, the achievement of self-perfection should be more important, to those who possess it than his physical and technical ability.

ONCE YOU HAVE PROVEN THINGS TO YOURSELF, YOU HAVE NO REASON TO PROVE ANYTHING TO ANOTHER PERSON.

The young man walked unsteadily down the street, talking to himself, smelling heavily of alcohol, and angry at problems known only to himself.

Approaching him was an elderly man enjoying his evening walk on the same street. When within a few feet of each other, the young man challenged the elder with slurred cursing. The old man said nothing, just letting him vent out his anger. At one point the young man shoved him. Increasing his verbal attack with vigor, he awaited some type of response.

What he received took the young man by surprise. The elderly man responded by saying EXCUSE ME SIR, I do not wish to fight you, but I would be honored if you would allow me to walk you home and for you to talk with me. In my elderly years I have few friends with whom I can talk.

With this reply the young man’s aggression diminished. Shaking his head to clear his thoughts, he looked into the face of the person his attack was directed towards. He saw the face, weathered by the passing of time, showing wisdom, compassion, and a peaceful understanding of his fellow man. Feeling embarrassed by his actions, he apologized and continued on his way.

A pleasant smile came over the elderly mans face as he continued his walk to the dojo. As a master of the martial arts, he had put into action the techniques of many years: 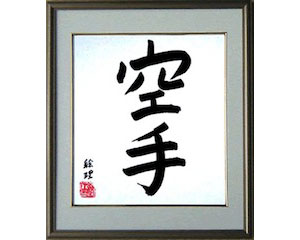 RESPECT: To another, his sensei, to his many years of study, and himself.

COURTESY: Regardless of the turmoil and unrest allow time for them to run their course.

HUMILITY: Courtesy and respect make us humble. When understood, this shows great inner strength and understanding of one’s self. Humility is many times taken as a weakness because people do not see it for what it is.

You decide from what you have heard. Is it weakness or is it strength?

“WHERE THE MORALITY OF KARATE IS MISSING, THERE IS NO KARATE.”

Morality is a major principle in our growth toward martial arts mastery!