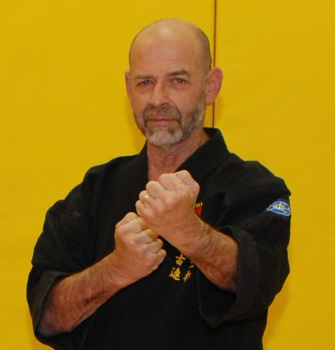 “Karate Ni Sente Nashi” basically translates into English as “there is no first strike in karate”. I first began exploring this idea some years ago because the concept intrigued me. While the idea of never striking first seemed like a good way of training karate students so they would not abuse their powers, it just didn’t make sense in the context of self-defense, where a proactive strike can be of critical importance. If I found myself in a confrontation with 3-4 assailants, wouldn’t I want to increase my odds of surviving by taking one of them out right away by using a preemptive counterattack?

It was in the Okinawan kata and my training with Sensei Al Gossett in the early 70’s where I began to understand the meaning of karate ni sente nashi. The forms were made up of fighting postures or kamae as well as intermediary and transition moves. The fighting postures were used for defense but in addition to that they were used to solicit specific responses from an attacker. For example, what I once saw as a downward block, all of a sudden became a lower kamae or guard position. If I was guarding my lower body with low guard position, then I could be pretty sure if I was attacked it would be to the upper body or face. Armed with this information, I could have a response waiting and neutralize his attack immediately.

Now this began to make sense, because we used this same tactic in military maneuvers on a regular basis. We would deliberately leave openings in our perimeter defense only to have the enemy walk into a prearranged ambush of some kind. This tactic gave us complete control and assured our success in that engagement. I began to explore the forms and saw time after time where I was being taught how to set up my opponent as well as the best possible counterattack to use at the precise moment the attack was launched.

This concept of karate ni sente nashi was beginning to make sense. It wasn’t until I spent time in Okinawa and got to know the
personalities of Hanshi and Kaicho did the idea of karate ni sente nashi take on a new level of understanding for me. Their genuine desire to never use their karate skills unless absolutely necessary shined through everything they did and said. They were the most humble people that I had ever met. They would turn and walk away to avoid conflict if at all possible. These same people had the capabilities of delivering the most powerful techniques I had ever seen during my over 50 years of training. What a perfect blend of yin and yang… a true balance.

This led me to understand that karate ni sente nashi was really a mental, philosophical, and spiritual ideology and not necessarily a physical response tactic. All conflict begins because of negative emotions. Doubt, fear, guilt, resentment, envy and even jealousy come about because we allow ourselves to have these negative emotions. Nothing good ever comes from negative emotions. Negative emotions are developed from four major sources – justification, identification, lack of respect, and blame.

The second thing that is necessary to have a negative emotion is to identify with it personally. The counter for this is to avoid taking things personally and to be able to detach ourselves. The modern student learns this by learning how to deal with individual techniques one at a time.

The third step in having negative emotions is feeling like we have been disrespected. A wise man once said, “You should not worry what other people think of you, because if you knew how seldom they did, you would be insulted.” In the dojo, we are taught how to show respect on a daily basis, and simply see people that do not do this as having not learned the proper way.

The last cause of negative emotions is blame. Most people that have a lot of negative emotions blame other people or circumstances for all their problems. The modern warrior takes complete responsibility for everything in his life and is proactive in creating and achieving his goals.

After more than 50 years of training, I now have come to an understanding that the concept of “there is no first strike in karate” is not about the timing of a physical response or even the lack of a physical response after you are attacked. It starts with the way we train. The life skills that we teach in the karate dojo today are actually the proactive method of teaching our students to defeat conflict before it ever occurs. Teaching these proactive skills, instead of reactive skills is in my humble opinion the true meaning of “Karate Ni Sente Nashi”.