“It’s All About Timing” 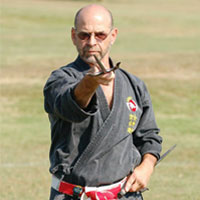 In my earlier years I occasionally visited officer’s clubs on military installations where I was stationed and was always intrigued by seeing pilots, even on Army bases, talking with their hands describing their aerial tactics during training or combat missions. Get two combat fighter pilots together and you can tell from across the room when the topic switches to combat tactics.

Martial artists are much the same as they discuss strategy and tactics in self-defense situations. One of the most common subjects is the timing of the response in self-defense. In Okinawan martial arts there is the ideal of “sen” or the moment of awareness that a threat is recognized. Using this terminology, let’s talk about different strategies in dealing with conflict.

Go No Sen means to counter after an attack has been launched. Martial artists spend many hours on this type of tactic by having a partner grab or throw a strike at them and then practice their response over and over again till it becomes a subconscious reflex. This type of training is very effective against surprise attacks in self-defense and a mandatory step in the self-defense process.

Sen No Sen is a level above this where the counter attack is launched at the same exact time the threat is realized. In fencing this is called a stop-hit. Bruce Lee called his art Jeet Kune Do or “the way of the intercepting fist” based on this strategy. The Okinawan punching-block is another example of this strategy at work and you can see examples of this in many of our kata. Green belt ippon kumite demonstrates this principle very well.

This strategy is dependent on your ability to recognize the potential threat before it occurs and through this awareness having a defense already in place. At the very first signs of the real attack, the counter measures can be released immediately. This is clearly a more advanced strategy, stopping an attack at the very moment it appears.

The highest level of achievement however, is Sen Sen No Sen. This tactic is based on defeating an attacker before the threat has ever been launched. No it doesn’t mean that you reach over and knock someone out because they may be a threat. It is based on superior knowledge of strategy, tactics and potential threats. Thereby using this knowledge to put defenses into place so an attack would never be successful. Thus minimizing the chance the attack ever develops. On a personal level, one must develop knowledge of psychology, verbal and nonverbal communication and personality styles, knowing in advance where a conversation or relationship is heading and being able to guide it down the proper path.

A true warrior knows where he or she is heading and polishes his words, deeds and actions to minimize obstacles on the path towards reaching his desired goals. This is the ultimate strategy towards martial arts mastery.