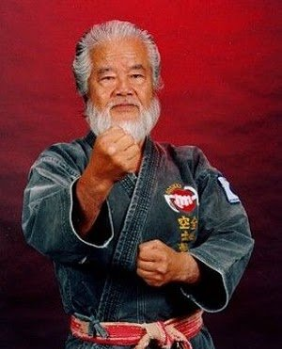 The first time I saw Fusei Kise perform his kata, I was amazed at the power generated when he moved. Since that time, I have seen a lot of students that try to mimic his motions, but there is just something missing. The ability to concentrate all the movements of the body to generate maximum force on a specific target is a crucial skill in martial arts training.

In empty hand combat, the principle of Chinkuchi (focused concentration) is extremely important. A concentrated response is dependent on three major factors – timing, speed and power.

Speed is enhanced through relaxing the muscles and yet the power of the impact of the strike is dependent on the tightening of all muscle groups at the moment and point of impact. This concept is called Kime in Japanese martial arts and Chinkuchi in Okinawan terminology.

Chinkuchi is achieved when someone uses his mind and body in a spontaneous action that creates maximum power from the body. To achieve this power, all the muscles, tendons, breathing and mental intent must be in perfect unity at the exact moment needed. Once this type of action, which focuses the entire body, is learned, the degree of power generated is dramatically increased. Thus, allowing a small person to deliver sufficient force to disable a much larger opponent. Targeting and weapon choice are other factors here as well and will be discussed in another lesson.

Chinkuchi is achieved by being perfectly aware of the situation (zanshin) and focusing on the appropriate response. Proper chinkuchi is also dependent on proper timing combined with the use of the appropriate weapon at the correct distance. This means that chinkuchi cannot be achieved if one is trying to use a kicking technique from too close a distance or a punching attack from too far away. This concept is often overlooked in sport karate when a competitor is awarded a point if he touches the opponent, without regard to whether the technique contained chinkuchi and could have totally disabled the opponent if the technique had not been controlled.

To achieve maximum power with minimum energy is the foundation of chinkuchi. The technique is very relaxed and fluid up until impact and at that instant every muscle tightens for a fraction of a second. The speed of the technique is increased by whipping it towards the target and locks into the target at the last second. This allows for the energy transference into and through the target.

A quality martial art is like a fine wine. From a distance, you can see two different glasses, one filled with colored water and the other with a quality wine. Only by picking them up and tasting them can you tell the difference. Quality martial arts are the same. Once you have felt a technique delivered with chinkuchi you will know the difference.

Anyone that has seen Fusei Kise of Kenshin Kan karate perform kata can immediately see this principle in action. You can actually feel the power of the techniques as they whip into place for the decisive blow. Kise Sensei has said, “Through constant practice and doing the technique correctly you will realize chinkuchi.” “If you are looking for chinkuchi you will not find it”, and “chinkuchi comes from natural movement, it just happens.” This wisdom is contained in his famous words, “more practice, more better.”

You can witness chinkuchi when you see a master carpenter drive a nail into wood or a swordsman slice through a stack of bamboo with one clean sweep. While the apprentice takes several “taps” to achieve the desired result, the carpenter or the master swordsman with proper body mechanics achieves his goal with one concentrated motion.

This is a core concept on the path to martial arts mastery.